Posted by Channels Television | 5 months ago 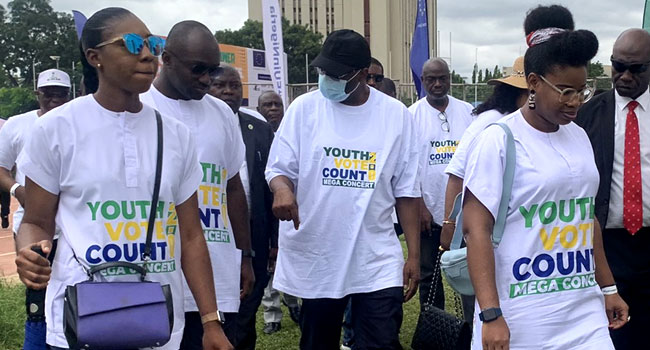 A photo taken on June 25, 2022, shows INEC Chairman, Professor Mahmood Yakubu, in company with others approaching the venue of the ‘Youth Vote Count


The Independent National Electoral Commission (INEC) has assured newly registered voters that their Permanent Voter’s Cards (PVCs) will be ready for collection from October.

INEC Chairman, Professor Mahmood Yakubu, gave the assurance on Saturday while addressing a crowd of youths at a mega concert tagged ‘Youth Vote Count’ at the Old Parade Ground in Abuja, the nation’s capital.

Amid the calls for the extension of the deadline for the Continuous Voter Registration (CVR) initially scheduled to end on June 30, the INEC boss averred that the commission would not halt the exercise anytime soon.

He stated that INEC has continued to register thousands of voters, especially as the initial deadline draws closer.

The mega concert is organised in collaboration with the European Union and YIAGA Africa, a civil organisation.

Organisers say the concert aims at using entertainment to educate young Nigerians on the importance of voting in elections.

According to them, it is also targeted at equipping the youth with the vital information and resources required to participate in the nation’s electoral process.

While INEC is targeting to raise the number of registered voters across the country to at least 120 million in 2023, the commission registered a little above 84 million voters before the 2019 general elections.

It is the grand finale of the mega concert to mobilise young people to get registered for their PVCs, as the nation prepares for another general election in 2023.

The mega concert in Abuja started on Monday, following a similar event held in Lagos the previous week.

Organisers say the exercise has so far seen over 10,000 eligible voters added to the INEC voter register in Abuja since the exercise began some few days ago.

Celebrities such as 2 Baba, Cobhams Asuquo, Zlatan, Broda Shaggi, and Waje, among other entertainers took turns to thrill fans at the event.

Some of the highlights of the concert are captured in the tweets below: