Posted by Channels TV | 3 weeks ago 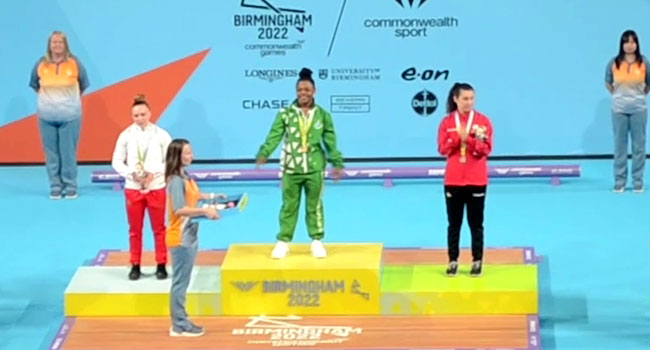 Channels TV -A screenshot taken on July 31, 2022, shows Folashade Lawal on the podium after winning gold for Nigeria in the women’s 59kg weightlifti


Team Nigeria have won another gold at the ongoing 22nd Commonwealth Games ongoing in Birmingham, the United Kingdom.

Folashade Lawal clinched the country’s second gold medal in the competition on Sunday evening in the UK’s second-largest city.

Besides the feat, she also set a new Commonwealth Games record of 206kg in the women’s 59kg weightlifting event.

Reacting to her victory, an excited Folashade said while she prepared hard for the challenge, winning a gold medal was not so close to her expectation.

With the latest feat, Team Nigeria have won a total of three medals – all from weightlifting as Folashade won gold hours after Edidiong Umoafia bagged a bronze medal in the men’s 67kg event. 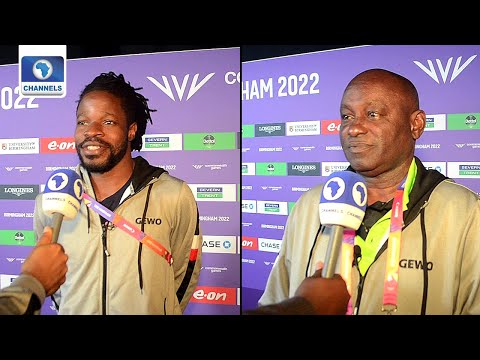 Adijat Olarinoye put Nigeria on the medal table on Saturday after winning the country’s first gold at the games in the women’s 55kg weightlifting event.

In another event, the men’s table tennis team have qualified for the semi-finals of the commonwealth games after coming from behind to beat Malaysia 3-2.

Following their remarkable comeback which helped them advance to the next round of the event, Team Nigeria will have to beat their Indian counterparts to book a spot in the finals and guarantee another medal for the country.

Elsewhere, English cyclist Matt Walls was involved in a horror crash at the Commonwealth Games on Sunday when he was catapulted over the barriers and into the crowds at the Lee Valley VeloPark.

The Olympic omnium champion, competing in the men’s 15km scratch qualifiers at the London venue, received treatment for more than 40 minutes before being taken away by ambulance.

Spectators were also hurt after Walls and his bike came over the top of the barriers on the high banking of a corner.

Two other riders — the Isle of Man’s Matt Bostock and Canada’s Derek Gee — were also taken to hospital, while two spectators were treated for minor injuries at the velodrome.

A statement from Team England said: “Following medical treatment in hospital, Matt Walls has been discharged with stitches in his forehead, scrapes, and bruises but thankfully no major injuries.”

The Isle of Man team said Bostock had a CT scan from which the initial prognosis was positive.

Witnesses said that because of the gradient of the banking, spectators in the front row had been unsighted for the crash.