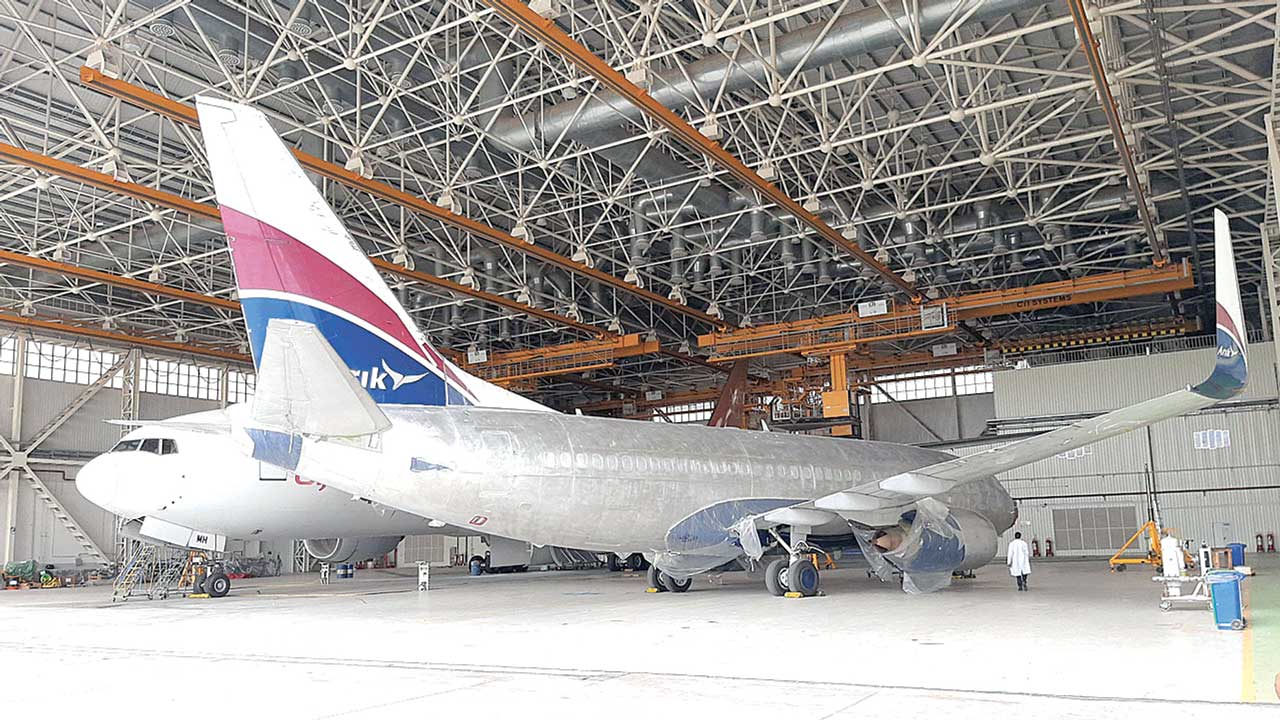 Beyond the withdrawal of services by two scheduled carriers, the entire local aviation sector may be in for a shutdown of operations over steady loss of fleet capacity that has made schedule reliability near impossible.

Findings by The Guardian showed that the eight active airlines are operating a cumulative 38.77 per cent fleet capacity, with a total of 60 out of 98 listed aeroplanes grounded, pending the availability of foreign exchange earnings to defray maintenance cost.

This is just as an aviation sector stakeholder, Mr. Bankole Bernard, suggested, yesterday, that 18 unviable airports in the country should be turned into shopping malls to generate revenue. According to him, only four airports – Lagos, Port Harcourt, Abuja and Kano – out of 22 airports in the country are viable. The operations of the other 18 airports had been unviable over the years, he noted.

Across the network, rail and road-shy travellers are not finding succour in air transport either. Flights to their destinations are either scarce or available seats are way too expensive, coupled with poor schedule reliability that routinely keeps checked-in passengers stranded in packed terminals.

Stakeholders acknowledged the dire straits of the local operating environment. They blamed the lack of a buffer on the absence of a sustainable aviation development policy.

Most conspicuous is the Aviation Roadmap initiative of the current administration, which has failed to deliver at least one of its promises in seven years.

A painstaking look at the ramp of Lagos Airport at the weekend suggests an industry that is winding down. Grounded aeroplanes are fast taking the parking spaces meant for operating aircraft. And further inquiries confirmed the fears.

Air Peace airline is the market leader with over 40 per cent of the total domestic operation as at 2021. It boasts of 32 aeroplanes, out of which only 12 were active as at last Friday.

Arik Air is next in terms of market coverage. It earlier boasts of 11 aircraft out of 30 on its fleet before its takeover in 2017. Currently, it has five active aircraft in operation.

Azman Air has a total of eight aircraft on its record, out of which only three are currently active. According to Airfleets Aviation platform, Max Air has a total of four active aeroplanes out of over eight credited to its operations.

The only state-owned airline, Ibom Air, has a total of eight aeroplanes out of which six are in active service. United Nigeria, has in over a year of operation, acquired four aircraft and two are currently active. Overland Airways also has about four in operations out of a total of 11 aeroplanes. Green Africa has its two aircraft in active operation. The duo of Aero Contractors and Dana Air have a total of 14 aeroplanes between them, all currently inactive.

The implication of having only 38 planes active out of a total of 98 or 38.77 per cent fleet operating capacity is most telling in the surging passenger traffic. The National Bureau of Statistics (NBS), in April 2022, estimated that 13 million passengers travelled Nigerian airports in 2021.

About 10 million of the figure is domestic travellers, which translates to 27,397 travellers daily. And when benchmarked against 38 active aeroplanes, each aeroplane has 720 passengers daily – that is, an average of seven to nine hours of operation (depending on aircraft cabin size).

Chief Executive Officer of Ibom Air, George Uriesi, at an aviation conference in Lagos, noted that in other parts of the world, nine flight hours daily would be fine, but not in Nigeria where the average daily operating hours per aircraft is five – given myriads of limiters that render aeroplanes grossly under-utilised.

Technically, more than 30 to 40 per cent of the travellers are currently underserved, with attendant crimp on demand and soaring cost of travel, just as air travel has become an act of faith.

As of yesterday, The Guardian learnt that most seats on the busy Lagos, Abuja, Port Harcourt, Kano and Kaduna routes, where available, were sold for between N76,000 to N100,000 for one-way economy seats. Round-trip tickets ranged between N140,000 to N190,000, depending on route, airline and time of purchase.

Chief Operating Officer of one of the airlines said the heavy downtime mirrors the dire reality in the sector.

“The truth is that more than half of those inactive (60) aeroplanes should be in operation right now. I’m aware that quite a number of them are in different stages of maintenance but delayed by shortage of hard currency. So, as we are struggling to fuel the few schedules available, we are also looking for dollars to bring more equipment into operations. You know how much a dollar costs now (N725/$) and you need an average of $2 million to do a C-check on B737.

“The two issues together are an overkill for any operator. We are really struggling and trying to make the most of the situation. The delays and cancellations are unfair to customers, but the airline also has to survive first. I have to put a cost to every move; otherwise, there is no point. It is a very difficult situation for us all. And without something drastic happening, I don’t see anyone surviving this for too long,” he said.

Uriesi, who is also a former Managing Director of Federal Airports Authority of Nigeria (FAAN), said operators were the most affected by the rash of idle capacity caused by the ‘Nigerian conundrum.’

He explained that for every one hour of flight an average aircraft missed, it is at least N4 million of potential revenue lost.

“The Nigerian airline uses the same airplane as everyone in the world. But compared to Europe, America and even Asia, our aeroplanes are way more expensive to purchase than theirs. Secondly, we pay higher insurance costs. Our safety record is very good now, but it has no impression on the insurers. As far as they are concerned, they have blacklisted Nigeria and you will have to pay a premium that is three-times more than the operators in Europe.

“Already, there is no balance, yet you are paying in dollars but selling in Naira. On top of it all, you are operating in a systemically limiting environment that makes it harder for you to be as productive as your colleagues in Europe, Asia and North America.

“The number of flights we do not utilise in a day because of those limiters is plus/minus three flights. That is N12 million worth of revenue daily opportunity lost. And I’m using N60,000 per seat on a 67-passenger flight, which is very low for most aircraft. That will be N4 million revenue per flight, 90 flights a month and N360 million of revenue off the table in a month for one aircraft. And in a year, it is 1,000 flights and N4.3 billion per aircraft,” Uriesi said.

He added that it was time Nigeria set up a home-based aircraft leasing company that would service the local operators in local currency and off-take the burden of seeking hard currency for aircraft purchase.

Indeed, his proposal is one of the cardinal objectives of the Aviation Roadmap initiative that the Minister of Aviation, Hadi Sirika, unveiled to stakeholders in Lagos and Abuja in 2016. The roadmap, aimed at “transforming” the sector, has deliverables like: a new national carrier, concession of airports for efficiency, Maintenance Repair and Overhaul (MRO) facilities to curb capital flight, and aircraft leasing companies to serve local operators. None of those have seen the light of the day.

Chief Executive Officer (CEO) of Belujane Konsult, Chris Aligbe, reckoned that the components of the Aviation Roadmap are crucial elements that should change any industry at any time, and “it is for that reason many of us supported it.

“Sometimes, one gets worried that those components did not come as early as they should. The industry would have been by far better. I feel somewhat disappointed in the context that circumstances appear to have made it what it is today. We were at the threshold of it, but circumstances of COVID-19 became a major issue and the depression that followed the pandemic too, not only for our country but for many countries,” he said.

He added that the problems of the local sector are beyond the industry and the Ministry of Aviation. And until the various arms of government come together with an affirmative action to address the issue of forex and fuel, “we would continue to be in this quagmire.

“If we allow aviation to collapse, the whole nation has collapsed. But we should not wait for that to happen,” Aligbe warned.

CEO of Topbrass Aviation, Capt. Roland Iyayi, said that the sob story could have been different where the aviation policy is right to catalyse economic growth.

Iyayi noted that Kenya and Ethiopia had similar challenges, but are least complaining because they have designed their policy framework for the development of their natural economy.

“The policy we operate in our sector is not suitable for the development needs of the country. You don’t set up aviation because you can, but to catalyse the growth of the country. All our airlines are operating into a finite market; and that is the same thing we have been saying in the last 10 years. There is a need to address the policy to support growth of other aspects of the economy – tourism, extractive industry and so on.

“I see more airlines failing in the short-term, simply because there is no capacity and airlines not getting adequate financial muscle to meet obligations. So, airlines will fail. It is probably going to get worse before it gets better. It is a shame, just because the foundation is not right,” Iyayi said.

MEANWHILE, Bankole Bernard, suggested, yesterday, that 18 unviable airports in the country should be turned into shopping malls to generate revenue. Bernard, Group Managing Director of a holding company in the aviation sector, was speaking on the sidelines of the 26th annual conference of the League of Airport and Aviation Correspondents.

According to him, only four airports – Lagos, Port Harcourt, Abuja and Kano – out of 22 airports in the country are viable. The operations of the other 18 airports had been unviable over the years, while efforts to enhance operations of Owerri Airport, another international aerodrome to operate from sunrise to sunset had proved abortive over the years.

He urged the Federal and state governments to consider the construction of shopping malls and other facilities that would attract more commercial activities to the unviable airports.

“What are the possible solutions to consider given the numerous challenges we are faced with in the industry? We can start with the modernisation of airport terminals with shopping malls.

“This will contribute to the commercial viability of the airports and other necessary infrastructures like the internet and constant power supply to support businesses.

“We must begin to think of an alternative power supply like renewable energy to keep the airports functional and reduce the cost of operation in the long run. This will also make the airports viable and attractive,” he said.

He added that government could also consider the provision of affordable hotels, which would give credence to investments in the industry.