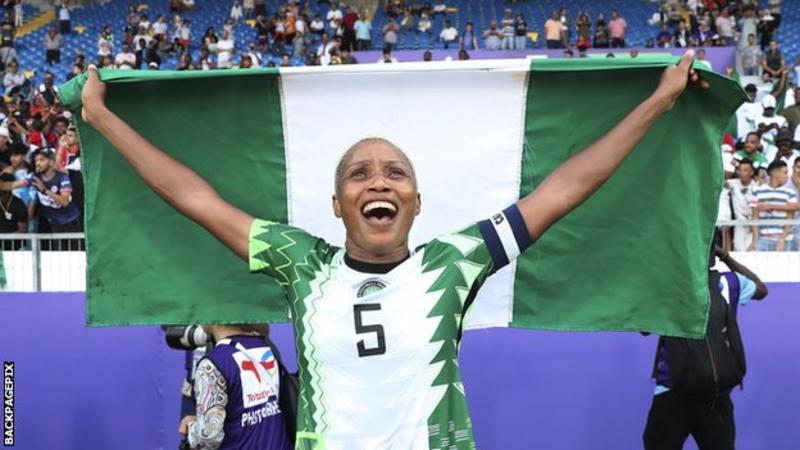 
The Nigeria squad are still waiting for the country's football federation (NFF) and Sports Ministry to settle outstanding debts from last month's Women's Africa Cup of Nations (Wafcon) and other training camps.

The Super Falcons boycotted training before their third-place play-off against Zambia, on 22 July, over the non-payment of both bonuses and allowances.

Each player is owed over $10,000, which includes win bonuses for their three victories en route to the semi-finals in Morocco.

The NFF insists the money will be paid soon, but one member of the squad said the players have been "told different lies".

"They said the money had been approved and will get to us in a few days' time - that was before the game against Zambia," the player told BBC Sport Africa.

"It's now gone from that to ridiculous excuses like wrong account numbers to network issues. The lies and disrespect clearly shows that they love to treat the women's team like the unwanted child.

"The Sports Ministry was always quick to celebrate our success with big statements, but since this money problem started they've been very quiet.

"Imagine if one of their own daughters was playing for Nigeria - would they treat her like that?"

BBC Sport Africa has contacted both the NFF and the Sports Ministry for comment.

Daily allowances while the team was in Morocco, totalling $2,800, and money for a pre-tournament camp in Abuja have been paid to the squad.

But along with their win bonuses in North Africa, Super Falcons players are yet to receive sums relating to trips to Austria and Canada as well as a bonus for beating Ivory Coast over two legs to qualify for the Wafcon finals.

Some players had feared they would not be paid after the tournament, but cut short their protest and finished fourth after losing 1-0 to the Copper Queens.

"The players should be getting the money this week because it's been processed," an NFF official told BBC Sport Africa on Wednesday.

Nigeria, nine-time African champions, qualified for the 2023 Women's World Cup by reaching the last four of this year's Wafcon, before then losing to hosts Morocco on penalties.

It is not the first time players of Africa's most successful women's side have protested over unpaid bonuses, with the Super Falcons involved in sit-in protests in hotels twice before at previous Wafcons.

The first came in South Africa in 2004 after the West Africans won the title, with another in 2016 in Abuja after claiming their eighth continental crown in Cameroon.

At the 2019 Women's World Cup in France, the players staged another sit-in protest over unpaid salaries and bonuses after their round of 16 elimination by Germany.

Each Nigeria player in Morocco is entitled to a $100 daily allowance and $6,000 for their two wins in the group stage.

Following a recent payment review, the players can also expect $5,000 for their quarter-final victory, but they missed out on proposed payments of $7,000 and $10,000 for potential victories in the semi-final and final respectively.