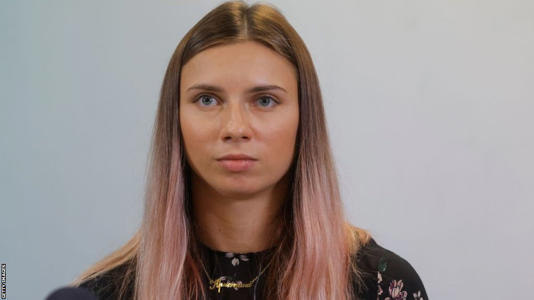 
ABelarus athletics coach who allegedly tried to force an athlete to fly home from the Tokyo Olympics has been charged with improper conduct.Krystsina Tsimanouskaya said she was taken to the airport in Tokyo against her will after criticising her coaches.

The sprinter received police protection after voicing fears for her safety and was later granted asylum by Poland.

Yury Maisevic has been charged with three offences by the Athletics Integrity Unit (AIU).

The AUI alleges that Maisevic, who was Belarus' head coach at the Tokyo Games, "verbally and mentally harassed" Tsimanouskaya.

Coach Artur Shumak, who was also under investigation, has not been charged.

"The AIU alleges that, in respect of these circumstances of Tsimanouskaya's removal from the Olympic Games, Maisevich did not act with integrity and acted in bad faith; failed to safeguard the athlete's dignity and his actions constituted verbal and mental harassment; and that he brought athletics generally into disrepute," said the integrity unit.

"An important role of the AIU is to safeguard athletes and protect them from harassment. The AIU has investigated this matter thoroughly and considers there is a case to answer for a breach of the Integrity Code of Conduct," said AIU head Brett Clothier.

Tsimanouskaya posted a video online saying that she was entered into the 400m relay event at short notice by Belarusian officials, after some team-mates were found to be ineligible to compete.

State media criticised her after she posted the clip, with one television channel saying she lacked "team spirit".

She said officials came to her room and gave her an hour to pack her bags before being escorted to Tokyo's Haneda airport.

Belarusian officials said Tsimanouskaya was taken off the team because of her "emotional and psychological condition".