Posted by Abdurrahman Umar | 3 days ago 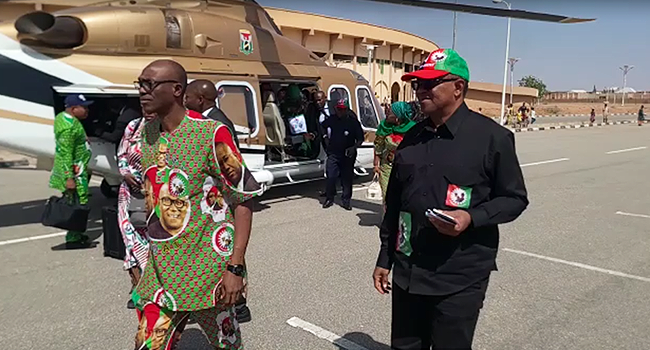 Peter Obi (R) arrives at at the Muhammad Dikko Stadium in Katsina State for his campaign rally on January 23rd, 2023.


The presidential hopeful made the promise at the Muhammadu Dikko Stadium ahead of the February 25th election.

The Labour Party (LP) presidential candidate, Peter Obi on Monday promised to build a new Nigeria as he took his campaign to Katsina, the home state of President Muhammadu Buhari.

He made the promise at the Muhammadu Dikko Stadium in the state in continuation of his nationwide tour ahead of the February 25th election.

The 61-year-old restated his commitment to restore peace, fight poverty, and open all land borders in the country for the economic wellbeing of citizens.

He urged women and youths in the country to ensure that they vote the right candidates in the forthcoming general elections.

Obi told his supporters in Katsina that it was unacceptable that seven local government areas (LGAs) in the state are under the control of bandits, assuring the crowd that a vote for LP will put an end to insecurity in the state.