Posted by Samad Uthman | 3 days ago 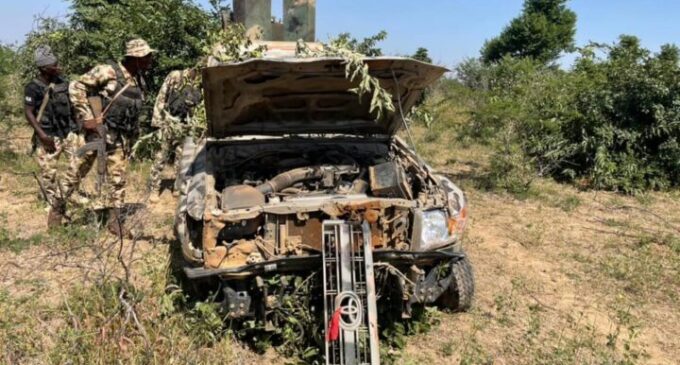 Zagazola Makama, a publication focused on the Lake Chad region, said the incident happened in Komala village along the road leading to Maiduguri from Damboa town, Borno state.

The publication quoted sources saying that the elimination of the ISWAP fighters followed a failed ambush launched on the troops who were on fighting patrol.

The insurgents were said to have been seen on one Hilux truck, one MRAP, and a number of motorcycles.

But efforts of the air task force and the ground troops led to the troops’ successful outing, the publication said.

It said while some were killed during the gun battle, others fled with gun wounds.

“We also succeeded in collecting one Gruntruck, MRAP as well as three motorcycles from the terrorists,” the publication quoted the source.

“ISWAP terrorists have continued to suffer a humiliating defeat in the hands of our troops. On January 13, the troops killed several of the terrorists and destroyed their MRAP when they attacked their own troops in Azir.

“The baggers attempted to try their luck on us but God was on our side. The victory is very glaring.”

The military has continued to win out on ISWAP and foil a series of their ambush in recent days.

On a similar outing in Azir village on January 13, the same troops of the 25 brigade repelled an attack by ISWAP.

During the battle which was supported by the air component, several insurgents were killed, while three soldiers were severely wounded.