‘He has what it takes’ — NCP adopts Obi as presidential candidate

Posted by Ahmad Sahabi | 3 days ago 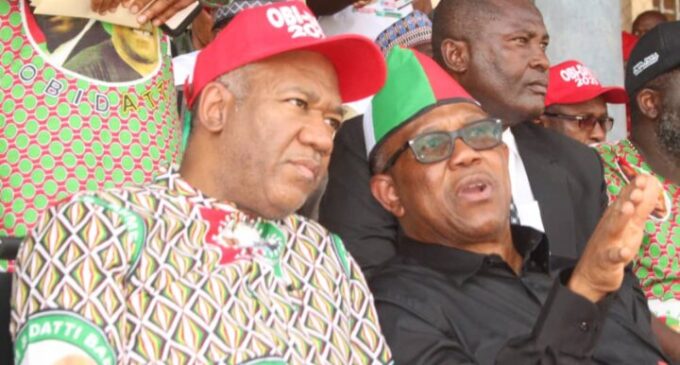 
The National Conscience Party (NCP), has adopted Peter Obi, standard bearer of the Labour Party (LP), as its candidate ahead of the February elections.

Yunusa Tanko, national chairman of the NCP, announced the development in a statement on Monday.

Tanko is also the spokesperson of the Labour Party’s presidential campaign council.

He said the NCP would mobilise its supporters nationwide to vote for the LP candidate “because we share their philosophy and manifesto”.

Tanko said after carefully studying the manifesto and characters of Obi and Datti Baba-Ahmed, his running mate, his party was convinced the LP candidates had what it takes to earn their trust and confidence.

“The NCP, one of the foremost political parties in Nigeria is pleased to announce its adoption of the labour party’s presidential flag bearer, ex-governor Peter Obi and his vice, Senator Datti Baba Ahmed as its choice for the fourth coming February 25th Presidential election,” the statement reads.

“Though we are still facing challenges of deregistration by INEC.

“We will mobilize our members and supporters nationwide to canvass and vote for the labour party candidature because we share their philosophy and manifesto.

“We have studied both the party’s manifesto and the characters of the ex-governor Peter Obi and Datti Baba Ahmed carefully and we believe that the labour party’s candidates have what it takes to earn our trust and confidence.

“As empowered by the NEC and NCC of the party on this day 22nd January 2023, we hereby adopt and endorse Peter Obi and Datti-Baba Ahmed’s Presidential ticket of the Labour Party for the 2023 general election.

“This adoption/endorsement has been officially communicated to the party even though we have since been working in collaboration with the big tent and Obidient movement to drive the project of Obi/Datti campaign.

“We urge all members and indeed Nigerians to work together with the Labour Party in achieving this monumental task of rescuing Nigeria, uniting and rebuilding its future.”