Posted by Terhemba Daka | 4 weeks ago 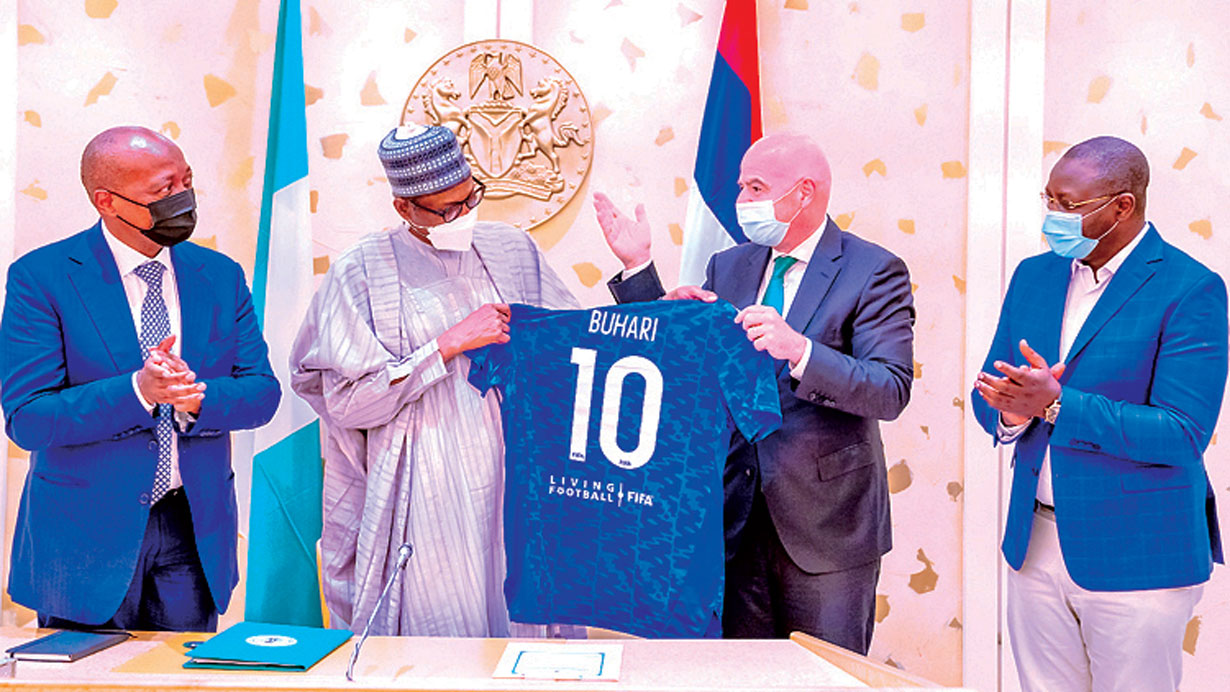 
President Muhammadu Buhari declared yesterday that his administration is committed to using football for the development of the girl-child and also inspire young people to have rewarding careers in the game.

Buhari spoke when he received FIFA delegation led by its president, Gianni Infantino, and the President of Confederation of African Football (CAF), Patrice Motsepe, at State House, Abuja. The President called on the top echelon of football’s world governing body to see Nigeria as one of its greatest assets when it comes to the development of football.

On women’s football, Buhari expressed delight that Nigeria has produced excellent role models to inspire the next generation of stars to take up the sport.

“Our National women’s football team, the Super Falcons, are a force to reckon with both on the continent and internationally.

“Some of our women footballers, such as Asisat Oshoala, who only recently became the first African to win the women’s European Champions League with her club Barcelona, Rasheedat Ajibade, Rita Chikwelu, Onome Ebi, who is the only African to have played in five FIFA Women’s World Cup Finals, Desire Oparanozie and before them, Perpetual Nkwocha, Mercy Akide-Udoh, Nkiru Okosieme and Ann Chiejiene are globally recognized stars,’’ he said.

Buhari urged the leadership of FIFA to consider Nigeria for support and investment. The President also told the visiting FIFA president, who is in the country for the six-nation Aisha Buhari Invitational Football Tournament, that since 2017 his administration had adopted football as a national asset.

He explained that the sport is being accorded the highest level of attention possible by the government to enable rapid development of abundant talents in the country.

“I have also approved the unveiling of a committee to draw up a 10-year football development master plan for the country.

“I expect that the recommendations of this committee will accelerate the development of football. It is my hope that it will further improve the fortunes of the game internationally.

On the Aisha Buhari Cup (ABC), with the theme ‘Playing for Good’, which is on-going in Lagos, Buhari said the tournament could not have come at a better time.

“This women’s football competition is a novel idea here and I am sure it will be exciting in its execution for our women folk and lovers of football.

“It is also a confirmation of what we already know about our women,’’ he said.
The President thanked FIFA for making ABC, a ranking tournament, adding that he looks forward to more countries joining to participate in the future.

Buhari pledged support for the latest FIFA initiative, the FIFA Connect programme, which aims to drive football development at the grassroots using technology, assuring of Nigeria’s active participation in the programme.

“Nigeria is one of the few nations of the world that has participated in all FIFA competitions, at all the different levels for both men and women. These have opened doors of opportunities for a lot of our young boys and girls, men and women to have rewarding careers in the game,’’ he said.

Speaking at the occasion, the Minister of Youth and Sports Development, Sunday Dare said Nigeria, as the leading black nation in the world, was central to all that FIFA is seeking to achieve in its football development plan.

“We love football and we follow the game passionately,’’ he said. On his part, FIFA President, Infantino renewed his commitment to support the development of football in Nigeria, pledging to strengthen its partnership with the Nigeria Football Federation.

“Nigeria is a big football playing country. We need Nigeria to lead the football movement in the world, together with Africa as a continent,’’ he said.

He thanked President Buhari for supporting the development of the game, appealing to him to help FIFA amplify the message of football as a uniting force. “When football is played, there are no divisions in a nation or continent. Football brings people together and to do that we need important countries like Nigeria,’’ he said.

Meanwhile, President of Nigeria Football Federation (NFF), Amaju Pinnick, said the presence of Infantino and CAF President, Motsepe, at the opening ceremony of the maiden Aisha Buhari Invitational Tournament in Lagos is a huge fillip to the push for more interest and attention to the challenges confronting the girl-child all over the African continent.

“I feel very happy that Mr Infantino and Dr Motsepe were able to grace the opening ceremony of this special tournament. It is a bonus and a boost for the girl-child advocacy. It shows there is genuine desire and keen interest in football by leaders to not only improve the standard and visibility of the women’s game, but to scale up the lot of the girl-player economically and ensure she can earn as well as the boy-player.

“Already, we can see that desire and interest manifest with the increase in the participating teams at the FIFA Women’s World Cup to 32 – the same number as the men’s finals – as from the next competition in 2023. On the African front, the Confederation of African Football has put in place a CAF Women Champions League, which finals will hold in November. All these are key building blocks to improving the lot of the girl-player.”