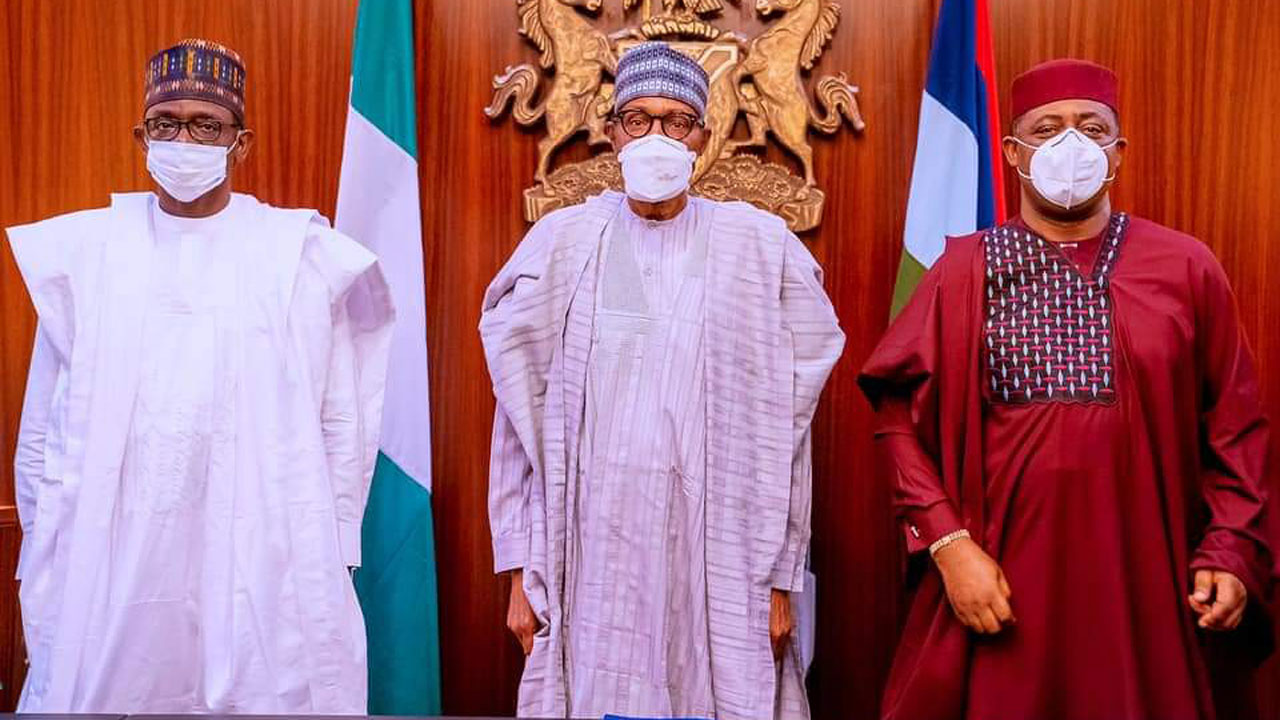 Though he had lately been skirting around some APC leaders, it was not anticipated he would make the bold volte-face after his strident and scathing criticisms of the President and his party.

But signs of his defection began to emerge last month when FFK made a spectacle of his appearance in Kano State during wedding of President Buhari’s son. This effectively set the template for his appearance yesterday at the State House, Abuja, where he was officially presented to President Buhari as a member of the APC.

The former spokesman of the PDP Presidential Campaign Council was introduced to the President by the Governor of Yobe State and Chairman of the APC national caretaker committee, Mai Mala Buni, who was accompanied by his Zamfara State counterpart, Bello Matawalle.

Fielding questions, Buni said: “We are here to present our newest member of the party, Chief Femi Fani-Kayode, to the President and leader of the party.

Fani-Kayode, who explained that he had been a founding member of the APC, said he returned to the party for the unity and togetherness of the country.

He further hinted that he was also working behind the scene to woo the governors of Oyo, Bauchi and Enugu states, Seyi Makinde, Bala Mohammed and Ifeanyi Ugwuanyi respectively to also dump the Peoples Democratic Party (PDP) and join the ruling APC.

He said it was entirely the business those people who hold a not-too-pleasant opinion about his credibility, because of his constant change of political affiliation.

On why he jumped ship, Fani-Kayode said his decision was hinged on the need to join other stakeholders in the country to build bridges in the midst of the prevailing palpable disharmony among citizens.

On what he thinks will be the impression of his former party, PDP, following his decision, FFK said: “Well, that’s left to them. I have many friends in the PDP. If you remember, in 2013, I was actually one of those that formed the APC, there were a few issues and I went back to PDP, but I think it’s an individual thing. As a party, of course, they may not be too happy, but I have no enemies there and I have nothing negative to say about anybody there.

“I believe in moving the country forward together with everybody that believes in Nigeria and wants Nigeria to progress. We must come together to make sure Nigeria is a better place, regardless of party affiliation, but whatever they say, is entirely up to them.”

THE PDP in Oyo State, yesterday, slammed Fani-Kayode for his claim of wooing Governor Seyi Makinde to join the APC. Publicity Secretary of PDP in the state, Akeem Olatunji, who spoke with The Guardian in Ibadan, urged Fani-Kayode to look elsewhere, saying Makinde is not available.

Olatunji said nationally, Makinde is the selling point and poster boy of the party. He added that Makinde is comfortable in PDP and cannot join the party that has inflicted pains on Nigerians.

The PDP spokesperson said: “Mr. Fani-Kayode, though respected, is not a stable politician. He is a joker. Governor Makinde is comfortable in PDP. He is our shining star and unique selling point nationally. Fani-Kayode should look elsewhere. The former Minister should search his conscience. He is looking for a soft landing for his past misdeeds and pecuniary gains. Governor Makinde is not available.”

SPECIAL Adviser to President Buhari on Political Matters, Babafemi Ojudu, described FFK’s defection as the saddest day in his political career. He posted the message on Facebook, hours after FFK met his boss at Aso Rock and defected to the ruling party.

“This is the saddest day of my political career,” Ojudu posted. Ojudu subsequently shared a previous vow by FFK that he would never join APC, adding “I prefer to die than join APC.”

APPEARING on Channels Television last night to further explain the reasons for his defection, Fani-Kayode said the party is different from what it used to be. While speaking on Channel’s Politics Today programme, he said the perception he had in the past was clearly wrong, and urged Nigerians to build bridges instead of throwing stones.

He added that there are lots of issues to be resolved in the PDP and he is waiting for the party to criticise his decision to move and give them an appropriate answer.

Fani-Kayode added that the APC of the time he was criticising President Buhari is different from what it is today, noting that the kind of leadership the party has today, led by the national caretaker committee, Buni, is doing exceptionally well in national issues.

“I wouldn’t have joined them if the leadership hadn’t changed. We can work together, we can build bridges. I have criticised the President in the past when I felt it was the appropriate thing to do, however, having moved closer to him over the last few months, I discovered a lot of things that I didn’t know before. There is a lot going on behind the scene.

“The most important thing is that if I believe in a certain philosophy and I am getting positive responses when I act from within the family and ensure that change is being affected in terms of policies and the way in which the country is run, then I begin to think that is it not better for me and my country to ensure that we operate from within and effect the changes we want to put in place, rather than from outside?

“There is no point having any principles without power. You must have power in order to ensure that whatever principles you have you can affect them. Without that, you will simply be talking and nothing will change. I have discovered in the last few months that I can work with people within the APC and elements within the government to effect a change.

“This country, in my view, is on the brink of war and disintegration and so we have to join forces together, set our differences aside and ensure that we build bridges of unity and peace. In a couple of weeks, I will be joining the party in FCT and not in the Southwest.”

When asked to comment on the statement he made in 2015 against President Buhari, the outspoken FFK said: “There is a time to condemn and criticise people. There is also a time to come together, work together to achieve unity.”

In 2015, FFK had condemned politicians that joined the ruling party, saying that he would rather die than join APC. Holding on the above statement, the Channels presenter asked Femi to give explicit reasons he defected, Femi answered: “Joining APC now is the away forward, despite what people may think about it. APC is a liberal party. A lot has happened in APC over the years. The party has changed and the President has accommodated the change. Had the APC leadership not changed I wouldn’t have joined them.