Southeast govs under fire over absence at Enugu summit 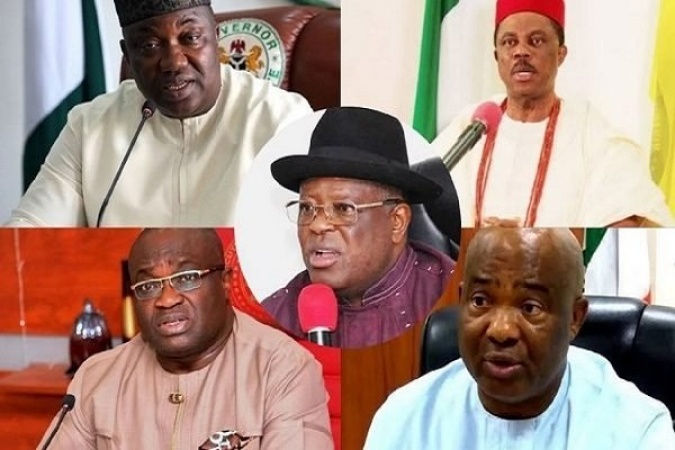 
Absentee Southeast governors at the Southern Governors Forum meeting held at the Enugu Government lodge, on Thursday, have come under severe criticisms from prominent Igbo groups and leaders.

Their absence was described as an embarrassment to the region by the respondents who expected they would grace the meeting to solidarise with the host governor, Ifeanyi Ugwuanyi.

Governors  David Umahi, Willie Obiano, Hope Uzodimma and Okezie Ikpeazu were represented by their deputies at the meeting.

Apex Igbo socio-cultural group, Ohanaeze Ndigbo, said it was saddened by the absence of the governors at the meeting.  National Publicity Secretary of the group, Hon Alex Ogbonnia Ohanaeze, in a telephone interview with The Nation, said they are  still investigating why some of the governors delegated their deputies. “We are still looking into it and we will come out with our findings. We weren’t happy that they weren’t there themselves but we will not conclude until we find out why. If they have a genuine reason, well… but if they don’t, we will make our own comment known.  For now we are still looking into it.”

Another Igbo group, the Concerned Igbo Stakeholders Forum (CISF), said there were no justifiable reasons for the governors not to attend a meeting of that magnitude.

In a chat with journalists in Enugu, the leader of the group, Mr. Chukwuma Okenwa,  said it was wrong particularly coming at a time when the region is battling socio-economic and security concerns stemming from the sit-at-home order issued by the proscribed separatist group, the Indigenous People of Biafra (IPOB).

“The absence of the governors of Abia, Ebonyi, Imo and Anambra states leaves a lot to question the commitment of these governors to the growth and advancement of the South-East in missing a crucial meeting held within their geopolitical zone.

“The body language of the South-East governors in recent times leaves no one to doubt that these governors have magnified their interest above that of the region and Ndi-Igbo in general.

“Their gaze at the forthcoming elections in 2023 is becoming an unbearable distraction for them in delivering their mandate to the people,” he said.

A chieftain of the All Progressives Congress (APC), Chekwas Okorie, expressed disappointment over the governors’ absence, describing it as an embarrassment to well-meaning people from the region. “I am not okay with that development especially when the meeting was brought to the Southeast and the only governor present was the host governor. I expected his colleagues to solidarise with him since he was hosting it on behalf of the Southeast governors but that didn’t happen.

“Because of my personal reach to most of  them, I will not be quick to make a strong criticism of what happened until I find out why.  But whether I am happy with it, I am not. Whether it is practically embarrassing to every well-meaning person from the South east, it is quite embarrassing. I will like to find out what actually happened between now and tomorrow because it is not the right thing. That solidarity ought to be there.”

A human rights activist, Chinedum Amobi, told The Nation that the  governors’ absented from the  meeting because they were afraid to discuss anti open grazing law.

He said someone like Obiano, who had not done anything on the open grazing  would not want to be questioned by his colleagues on why he’s shying away from it after their meetings in Delta and Lagos respectively

“The truth of the matter is that Obiano is not interested in the anti-open grazing bill. Apart from Enugu and perhaps, Abia State, the other governors in Southeast are not interested “ the activist said

A human rights lawyer, Barr Emperor Ogbonna, said: “Most of the governors of the Southeast stayed away from the meeting of the southern governors’ forum probably because they don’t think that the meeting is worth attending.

“You know that at the last meeting of the forum they agreed that open grazing is outlawed and that states shall pass anti-open grazing laws.

“However, up till today, so many of those states are yet to pass a law outlawing open grazing.

“Even those that passed the law do not have the will power to implement it as we still see cattle grazing in the open and nobody arrests the cows or the herdsmen.

“So I think that most of those that stayed away might not have seen the need for that forum.

“Also, the group has been talking about the emergence of a president from the south.

“However, with the incidents of defection among the governors to the APC, one doubts whether they would have the political will power to work against their party if the party decides to field a non-Southerner.

“To me, I don’t think they will go against their party so to me, it appears that they consider the forum a toothless bulldog

“These governors are more interested in their own political future and any resolution by the forum that may make them be at loggerheads with their parties may not be welcome to them so the absence from the meeting appears to me as deliberate as they do not want to be confrontational to their parties and even, the north controlled federal government, which government may go against them on matters of corruption after their tenure and if a person they do not support emerge.

So I think they are either playing safe or did not find the meeting relevant.”

“If our governors will be so scared to attend a meeting in their own geo-political zone just because they don’t want to offend their masters in Abuja, it means that Ndigbo are really in trouble. The governors were elected by the people to lead them and not by anyone in Abuja.

The  South East governors should stop this hide and seek game . They must be man enough to protect the interest of their people or resign from office.

Governor David Umahi of Ebonyi state on Friday told other governors in Southern Nigeria that he won’t support their resolution on collection of the Value Added Tax by states.

Umahi, who is the Chairman of the South-East Governors’ Forum, spoke on Channels Television’s ‘Sunrise Daily’ breakfast programme.

VAT is a consumption tax paid when goods are purchased and services are rendered. It is charged at a rate of 7.5 per cent.

Rivers and Lagos states governments had moved to start the process of collecting VAT within their territories before they were halter by the Court of Appeal in a ruling on September 10.

The court ordered a status quo pending the determination of an appeal filed by the Federal Inland Revenue Service against the judgment of the Federal High Court sitting in Port Harcourt.

The Nation gathered that Ogun State has also started the process of passing a bill on VAT in its House of Assembly.

The Southern Governors’ Forum led by Governor of Ondo State, Rotimi Akeredolu (SAN), reading a communiqué at the end of a meeting on Thursday had said, “The meeting resolved to support the position that the collection of VAT falls within the powers of the states.”

But Umahi said his stand on the issue has not changed despite the resolution of the Forum.

“We (Ebonyi) took a stand as a state with our leaders on the issue of the VAT war that is going and so my deputy carried it on to say that this is what my governor is saying and this is what the state is saying and he went ahead to explain with some other deputies that represented their governors.

“But together they were in the minority and it didn’t stop the majority from coming up with their communiqué. When it comes up to implementation and voicing out, I will continue to say: this is where is I stand; if it is a choice, I will choose what would benefit my state.”

Umahi also said every state in the country is dependent on each other as each state has one thing it is lacking that it gets from another state.

Umahi warned that a change to the status quo in VAT collection will lead to a collapse of many states in the country.

He said it was not right that some states would “eat and have so much surplus and then some other states don’t have much to eat.

“We have to be our brothers’ keeper; we have to see how we can grow the economies of the weakest states, otherwise, we will breed insecurity in those states.”

“There is no way in a relationship that you will get 100 per cent of what you put in, it doesn’t work that way,”

“Whatever thing we are doing, we have to think about the nation first. Let’s tarry a while and see how we can pass this river and then we can come to the fact of who is right and who is wrong.

“True federalism is not done in a day. If we want to do a restructuring, we have to have a gradual process to do that.”
Governorship campaign stopped Obiano, deputy from attending meeting

The November 6 governorship campaign in Anambra State was the reason why Governor Willie Obiano and his Deputy, Dr Nkem Okeke did not attend the Southern governors meeting in Enugu Thursday, The Nation learnt

A source close to the government House Awka, who did not want to be quoted, told The Nation that the two had been engaged in making sure their party retains the governorship seat

When The Nation contacted both the Chief Press Secretary to Obiano James Eze and the Commissioner for Information and Public Enlightenment, C Don Adinuba, they said they were not in the know.

But one of the government officials, who pleaded anonymity, told The Nation that both men were neck deep in campaigns to make sure Prof Charles Soludo succeeds Obiano

According to the source, “that meeting was never Obiano’s priority and the Southern governors should know that  Anambra election is almost at hand

“ And other parties are doing everything possible for APGA to lose it, just to humiliate the governor

“So, the governor doesn’t want to give any one such opportunity. He’s only interested in making Soludo governor and I think it was the major reason why he did  not go or send his deputy, “ the source said.

The Chief Press Secretary to Imo State governor, Hope Uzodimma, Oguwike Nwachuku, said that the absence of the governor could be  because of exigency of the office. “That is why there is the office of the Deputy Governor. Duties can take the governor out of the state, he can then delegate the assignment to the deputy governor.”

Sources within the corridors of power in Abia State who would not want their names mentioned claimed that why Abia State governor was absent from the meeting in Enugu State was because he was out of the country  some weeks before the meeting was scheduled.