THREATS TO MY LIFE BY YOUR AGENTS: AN OPEN LETTER TO GOVERNOR IFEANYI UGWUANYI

Posted by Ikem Okuhu | 4 weeks ago 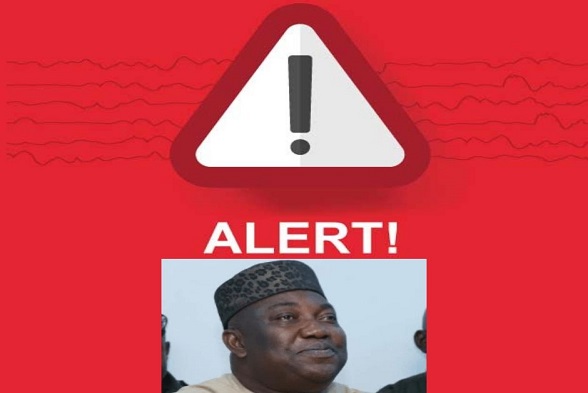 I had thought that the message I sent to you months ago when the Enugu State House of Assembly initiated an obnoxious Bill for a generous pension law for former governors, former deputies, and their spouses, was going to be the last. But how could I have known that a more serious issue would crop up to necessitate another letter, this time to inform you of the streams of threats to my life by people that have apparently been hired to fight your real and imaginary enemies.

These threats have been endless, especially since the past few weeks, and I am forced to bring this to your attention, that is assuming you did not know and perhaps encouraged the strangely brazen violent literature by persons working for you, in the wake of the promotional announcements I had made on the social media ahead of the release of my book, Eighteen Months in Neverland: Chronicles of My Daze in Government

The strongest and boldest of these threats came from a fellow with telephone number, +2347018208852, and whom the Truecaller App on my phone revealed his name as Frank Mbah. Shortly before sharing the gory picture of a screaming monkey that had a piece of iron rod piercing his genitals from the front to the back, this fella wrote to me on Whatsapp, calling me a “Beast” and then went further to add that, “For daring to touch our governor, you have murdered sleep and shall henceforth sleep no more. Bastard!”

Again, writing on Facebook, one Shepherdman, Chijioke Iyioku, clearly told me I (and my “co-travelers”) am “on the path of destruction” for daring to put together, a body of work containing the sad and crushing experiences I went through while working in your team between June 2018 and December 31, 2019.

Then, on one of my Facebook posts, one Eze Nwamadi proclaimed that I was “doomed” and then added: “Make sure you don’t step your feet on Nsukka land…” By saying that I should not step my feet on Nsukka land again suggests an intention for a violent attack on my person.

Let me state that, from the profile of this so-called Eze Nwamadi, I could tell he is one of the hundreds of the social media scoundrels who hide under fake identities, or what you frequently call “Sudo-names (pseudonyms) to hound those who speak against some of your many unpopular policy initiatives.

I am also aware that one Ben Ugwoke from Obimo was also going around asking for my phone number. Interestingly, the night after I learned that this man who claims he is also a clergyman as well as your special assistant, made these inquiries, two vehicles, one a white Toyota Hilux, and the other, a grey-coloured Toyota Sienna minivan, came to my house in Nguru, drove around and went away in what I genuinely consider a pre-attack reconnaissance. Incidentally, the same Ben Ugwoke had, in a phone call some months ago, during the rage of the now rested Pension Bill, also issued a threat that was quickly withdrawn when I asked him why he was threatening my life.

Your Excellency, one other person that has threatened me is one Reuben Onyishi, who, I had confirmed, had been on the payroll of one of your Commissioners, Barr. Chijioke Edeoga. Reuben, apparently in the belief he is working for the man you hope to anoint the next governor of Enugu State, has made it his business to insult, threaten and slander anyone he believes is standing in his way of being a future aide to a potential Governor Chijioke Edeoga.

I was in Nsukka on Friday, September 17, 2021, to hand over 8,000 exercise books my family was donating to public primary schools in Nkpunano Ward. My family had been doing this for three years in memory of our mother. But I was shocked to read posts from Reuben suggesting that I had seized that moment to insult you and that the Education Secretary of Nsukka Local Government Area was there and allowed that to happen.

If there is a problem with your style of government, and there are tonnes of them, these men you have hired to brush your increasingly flagging image are doing a lot more damage. Reuben, in his characteristic vileness, wrote an ugly piece filled with lies and falsehood, giving the impression that a project that was initiated even before I joined your government in that futile 18-month journey, was used to attack you. And in this article, he also issued threats against me.

In a carefully tailored tirade, Reuben wrote, among other things that:

“Ikem Okuhu seems to be daring Governor Ugwuanyi to a disgusting point. Okuhu is surely biting more than he can chew. Whoever owns that man should quickly advise him. He is dancing offbeat; he is dancing Surugede dance, a dance of the death… Before His Excellency, Governor Ugwuanyi, Ikem Okuhu is a flea that can easily be crushed…”

Your Excellency, while I take the first three sentences as the threats directly coming from Reuben, you will agree with me that the last sentence was written to describe your capacity and capability to crush me like a flea.

My question is, are you such a violent person? Could it be that you had told these people, Reuben inclusive, that you are going to kill me? Only such discussion could have given this man the confidence to speak this way on your behalf and on open, viral social media!

Let me also note here that the general coordinator of your social media greyhounds, Ahmed Onyekachi Ugwu, had at one point also spoken of a certain “Intelligent Oriokpa” that he and his men would kill when the masquerade comes to the village square to dance. From all I have mentioned here, would anyone not draw easy conclusions of who this Intelligent Oriokpa is?

What I do not understand is the reason behind the feverish desperation your supporters are deploying to frustrate the release of this book? I have heard many f them saying that there was no book anywhere and that I was merely trying to attract attention to perhaps make you return me to your famous “NRASHI” dining table. Reuben Onyishi pointed to this in his infamous article of Saturday, September 18, when he suggested that it was not a book that I had written. Nw, if this is so, why the panic and desperation to silence me?

Let me make it clear that I am not doing this because I am afraid. While there is no human being that wouldn’t experience fear when he is buffeted by such threats as I have taken time to mention here, what I feel is not that kind of fear, and that is why no matter how they hound me, I will remain resolute in this resolve to release my book at the time I have scheduled it. And whatever happens to me, kindly be informed that I have already written an agreement with my publishers to release the book even after I had been taken out by the agents, your agents, now threatening me.

A Governor and the Company He Keeps

Ever since I got close to you back in 2016, I had wondered why a man like you that professes strong Christian beliefs would have people of questionable character as his close allies. I will present the profiles of just a few of them.

The commander of your social media strike team is a man with a shady career. Having failed to obtain a degree after four years of wandering in a university, this man went to the north, purportedly for his NYSC, returning with a fake certificate and a strange Muslim name. But nowhere in his career has he ever presented the degree he claimed to have obtained from the university perhaps because he realised that people knew he merely wasted his time and his sponsor’s money and did not earn a certificate. Yet, he is your strongest ally among the youths; a 62-year-old youth! I have heard he is your political godfather and had introduced you to politics in the early days. Today, his lack of qualifications has forced him to remain your slave.

You cannot stand by pulling down everyone around you. On the contrary, each time you pin others to the ground, you have to bend to the ground to achieve this. Enduring reputation is constructed not by attempting to destroy and tarnish others, but by carving your own space and nurturing a unique, distinguishable proposition around it.

What about this other one that has been attacking everyone on your behalf? Your Excellency, haven’t you heard that twice, he was sacked from his job as a banker for fraud? Haven’t you heard that after failing to get another banking job, he retired to Enugu where he also swindled some people in his failed real estate business? But this man is the person leading your war against non-existent political enemies.

What about this other one that claims to be a reverend in the Anglican Church and whom you made an aide? Did you not know that he was dismissed by the Church after he was discovered to have swindled members of the church under one dubious Ponzi scheme? What are you doing with such a tramp?

There is this other one that was used as a make-weight for your settlement with Senator Ayogu Eze. He goes around parading himself as a lawyer and courting the bogus title of “Barrister.” Are you not aware that he did not qualify as a lawyer?

How Can I forget to remind you of the other eternal young man that claims to represent the horde of your “youth” supporters? Did you so quickly forget that he is a blackmailer and that at a time, he even tried to blackmail the person you had anointed to represent one of the Federal constituencies in Nsukka zone following which he was beaten to stupor and had to be hospitalized at the UNN Medical Centre?

The list goes on, but I will stop here for now. When people of questionable character speak for you, it somehow tells the story of who you are, even if you are not of the same plumage. Good men do not allow dubious people to represent them, lest people begin to mix and match their personalities with theirs. And you won’t blame those who do.

I have taken time to remind you of all these just so you know the sources of the not-too-good reputation you have been piling as you approach the twilight of your administration. It is also very unfortunate that Chijioke Edeoga, a man who should understand the fundamentals of reputation management, is habouring a shady person like Reuben Onyishi and a few others under the guise of working for you in the hope you’d make him the next governor. Such methods have never worked and never will. You cannot stand up by pulling down everyone around you. On the contrary, each time you pin others to the ground, you have to bend to the same ground to keep them pinned. Enduring reputation is constructed not by attempting to destroy and tarnish others, but by carving your own space and nurturing a unique, distinguishable proposition around it.

This is why I will conclude by advising that, in the interest of whatever legacy you may wish to leave behind after 2023, it is important you call these men threatening me to order. This is because I AM NOT AFRAID. There is nothing they can do to a very determined person.