Posted by Oluwaseun Akingboye and Timothy Agbor | 4 weeks ago 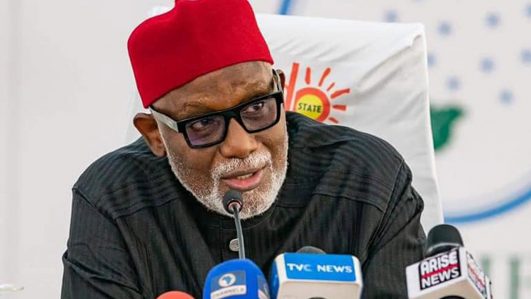 
Chairman of the Southwest Governors’ Forum and Ondo Governor, Oluwarotimi Akeredolu (SAN), has urged his Kaduna State counterpart, Malam Nasir el-Rufai, to desist from plot to plunge the nation into anarchy.

The governor, in a statement made available to newsmen in Akure, yesterday, by the Commissioner for Information and Orientation, Mr. Donald Ojogo, said the comments of the Kaduna governor on anti-grazing laws not being implementable was unfortunate.

“From all indications, Governor el-Rufai, if he was properly quoted and his views not misrepresented, is struggling hard to export banditry to the South under an expressed opinion that is laced with mischief.

“In these days and times, anyone who makes statements such as that allegedly made by the governor belongs to a class of an unenviable ilk masquerading as leaders.

“There is no wisdom in condemning/banning open grazing, prohibiting the inter-border movement of cattle in the North, including Kaduna State, with an accompanying disapproval of a law that gives bite to same, in another part of the country.”

Akeredolu implored his Kaduna counterpart not to externalise banditry, declaring, without mincing words, that the anti-grazing law would be vehemently implemented to protect the people of the South, especially in Ondo State.

“Perhaps, it is apt to state clearly that the likes of Governor el-Rufai are already in a hysteric ‘mode’ of escalating and indeed, externalising banditry, especially as the military onslaught against criminal elements and other terror variants suffices in the North.

“For emphasis, any such comment like that of the Kaduna governor, if indeed he made that statement, merely seeks to encourage anarchy under the guise ‘of resentment of a law by affected stakeholders.’

“In other words, it is a cleverly crafted path towards replicating in the South, the most despicable situation in the North that Nigerians of goodwill daily pray to overcome. It is a ploy beyond the ordinary.”

According to him, “it must, however, be noted that the anti-grazing law, especially in Ondo State, has come to stay. It shall be zealously guarded and conscionably deployed to protect all residents of the state, notwithstanding their ethnic and religious biases. Those who have nothing evil to perpetrate have nothing to fear as regards the law.”

At the moment, the ban is in place in Ebonyi, Abia, Bayelsa, Rivers, Oyo, Ekiti, Ondo, Delta, Akwa Ibom and Osun states. It is still in the legislative process in Enugu State, while in Cross River and Ogun states, the bill has been passed by the state Assembly but awaiting their governors’ assent.

El-Rufai is not the only one who has openly expressed his opposition to the anti-open grazing law, the governor of Nasarawa State, Abdullahi Sule, also said his government would not introduce a law banning open grazing. According to him, the approach to addressing the clashes between armed herdsmen and farmers has failed.

The governor, while speaking on Channels Television, stated that the ban had not worked in the states that introduced anti-open grazing law.

Sule noted that members of a suspected terror group that had infiltrated Nasarawa had been confirmed to be speaking Fulfulde, a language peculiar with the Fulani. He, however, said they might not be Nigerians as there were Fulani in other African countries.

“One thing that the Northern Governors’ Forum has decided and we have taken the decision, is that the current method of open grazing is old-fashioned, outdated and it cannot be sustained.

“It is very easy for Nasarawa State to say within one week, we will go to the House of Assembly and we will have an anti-open grazing law. What happens to the Fulani that is moving back and forth? What do you do with them? We kick them out? Let us say we are able to kick them out and they move to the next state, and the next state introduces its own anti-open grazing law, then what happens?”

Sule noted that while Nasarawa had accepted that open grazing was no more working, it resolved to provide options for the herdsmen, including being the first to adopt the National Livestock Transformation Plan.

THE Osun State government, yesterday, warned Fulani herdsmen against violating the new anti-open grazing law. Speaking at a stakeholder meeting with Fulani leaders and herdsmen in the 30 local councils of the state, in Osogbo, the Special Adviser to Governor Adegboyega Oyetola on Civic Engagement, Olatunbosun Oyintiloye, enjoined them to obey the law for the harmonious relationship to continue.

Oyintiloye, who noted that the law was unanimously made by Southern governors because of challenges being faced by people in their localities, particularly on kidnapping and attack on farmers, maintained that it was not to witch-hunt any tribe or individual.

He commended Fulani in the state for their peaceful conduct and charged them to sustain their cooperation with the government by obeying the new law.

He said: “The law is to protect all of us. It is not because of hatred for anybody. The law is not to fight the Fulanis, but to protect you. It will enable the government to know those unregistered herdsmen you have been reporting to us that are entering the town and trying to tarnish your image. It is like a traffic law. Whoever is caught will be punished, and not only Fulani.”

Also, the chairman, Committee on Fulani/Bororo and crop farmers, Mudashiru Toogun, warned the herdsmen to desist from leaving their children with cows, saying any underage child caught with cows will be arrested and his father will be punished for it.

Responding, the Seriki Fulani of Osun State, Ibrahim Babatunde, promised that he would call his members and warn them about the new law. He urged the government to also warn some members of the public that have been threatening to send them away from the state because of the new law.

He said: “Some people have been threatening us that the state government has made a law that we should be pursued out of the state. Help us talk to them. We also promise to cooperate with the government as we have been doing.”