Posted by Isaac Umunna | 4 weeks ago 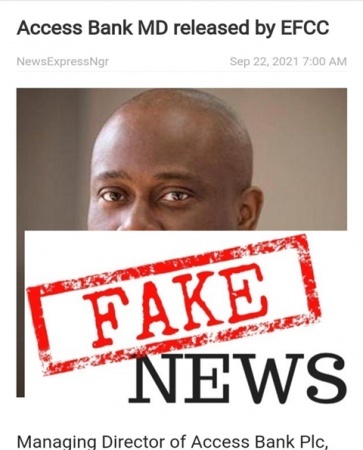 However, reacting to the publication, News Express Publisher Isaac Umunna said: “This is a shocking case of taking fake news to a new level. News Express never published any such story recently, not to talk of doing so yesterday.

“As a matter of fact, our last story on Mr. Wigwe was on 28 June this year and it was on his emergence as African Banker of the Year, while our last story on Access Bank was on 16 September, 2021, and it dwelt on the bank’s successful launch of $500m Eurobond.”

Umunna regretted that News Express was being targeted by purveyors of fake news shortly after unscrupulous elements published a fake digital edition of THISDAY.

“We know that this is the burden of success as fakers usually target successful brands. Even so, we strongly condemn this shameful act by Opera News wish to appeal to the reading public to disregard the fake report of yesterday as it did not emanate from News Express, Umunna said.