Critics of Buhari on borrowing are insincere – Lai Mohammed

Posted by NAN | 4 weeks ago 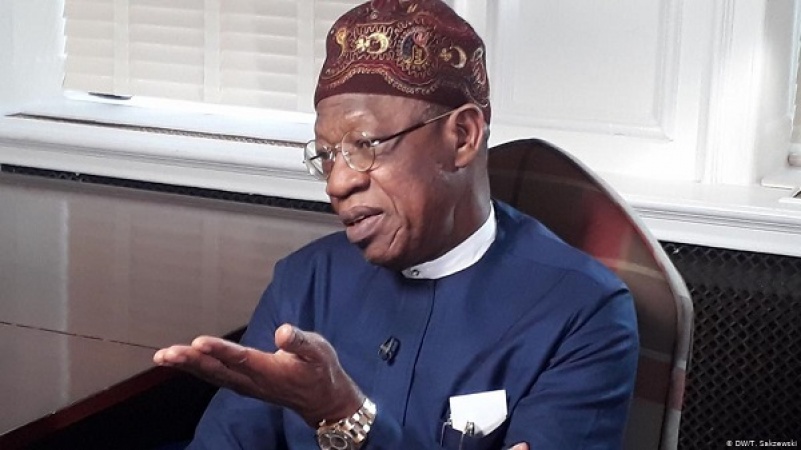 
The Minister of Information and Culture, Alhaji Lai Mohammed says those ramping up the criticism of President Muhammadu Buhari’s administration on borrowing are insincere.

The minister said this on Thursday in Maiduguri at a Town Hall Meeting to address vandalism of power and telecommunications infrastructure.

The News Agency of Nigeria (NAN) reports that the event was attended by Borno Governor, Babagana Zulun, his Deputy, Usman Kadafur, traditional, religious and political leaders and other stakeholders.

According to the minister, the Buhari administration is not borrowing for recurrent expenditure or to pay salaries, rather to build world class infrastructure that will benefit generations of Nigerians.

Mohammed said they had a lot to show for the loans taken, including the standard-gauge rail lines between Lagos and Ibadan as well as Abuja and Kaduna which he said were running well.

“Today, we have new airport terminals in Abuja, Kano, Lagos and Port Harcourt, the Itakpe-Warri rail line that was abandoned for decades is running.

“We have well over 13,000km of federal roads under repair, rehabilitation and reconstruction and there is a road project in every state,

“Today, we have started the countdown to when the 2nd Niger Bridge, which successive administrations have built only on paper, will be completed.

“The list of projects we are handling with the loans we obtained is long,’’ he said.

He said if the previous administration had embarked on the kind of infrastructure development the Buhari government engaged in, there would have been no reason to borrow.

“For example, in their time, they claimed to have spent billions of Naira in building infrastructure, but as one can see, their infrastructure projects were only on paper.

“Today, we are still saddled with looking for resources to build the same infrastructure for which they claimed to have allocated huge resources.

“We will not be deterred by the antics of those who believe they can play politics with everything.’’

He said efforts by the present administration to address massive infrastructure deficit the country was facing were being thwarted by vandals and their collaborators.

The minister said Borno was chosen as venue because Maiduguri had been cut off from public power supply since January due to the destruction of power infrastructure by terrorists.

“The terrorists who are destroying power and telecommunication facilities in Borno, have chosen to weaponise these attacks in order to inflict the maximum hardship on the people and also slow down the advances of our gallant troops in decimating them,’’ he said.

Mohammed said the town hall meeting would help to create in the public mind that government property were citizens’ property and must be protected for the benefit of all.

He said it would help to sensitise communities, especially those where infrastructure were located to be conscious of the need to protect them.

Mohammed underscored the need to expose, arrest and prosecute all those who engage in buying pilfered infrastructure items along with those who bring to them to sell and subject them to the full wrath of the law.

Mohammed said the town hall meeting would encourage the larger citizenry to support the widespread campaign on the protection and ownership of public infrastructure/assets.

The minister thanked the governor for hosting the event and appealed to all Nigerians to join the campaign on the ownership and protection of public infrastructure.