Posted by Emma Amaize | 2 weeks ago 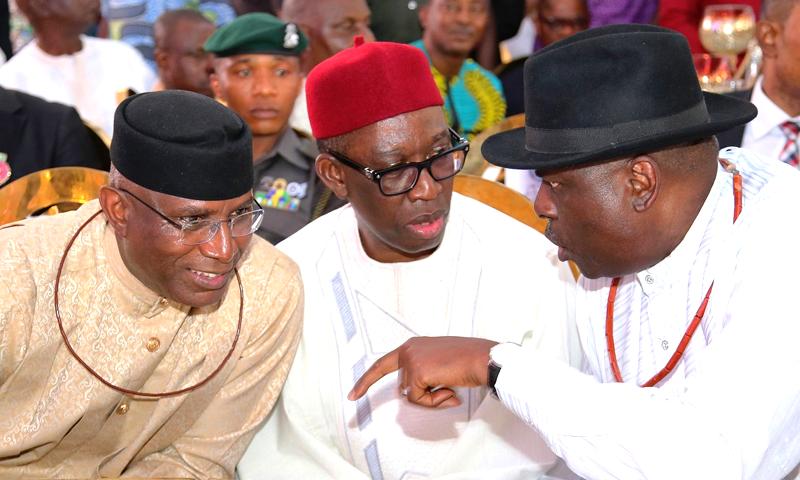 APART from governorship, the senatorial primaries, in about two weeks, for tickets of the different political parties in Delta South, Delta North and Delta Central Senatorial districts is the next formidable battle in the line-ups for 2023 elections in Delta State.

While certain aspirants are in the contest to strike other political bargains, some are partaking to prove their mettle, but deft moves by political godfathers to settle political scores and assert their powers with some of the runners as willing collaborators, have also manifested.

Senator Peter Nwaoboshi representing Delta North senatorial district, who qualifies as the fourth political principality in his own right is, however, running for a third term ticket in 2023 on his own clout.

They all interface as field commanders and strategic backers in senatorial elections that signpost a divergent party-political milieu in opinionated cunning.

Re-start of Okowa, Nwaoboshi hostilities In Delta North, former Member, House of Representatives, legal consultant and philanthropist, Hon Ned Nwoko, who is in contention with Surveyor Paul Oseji for the Peoples Democratic Party, PDP, ticket appears to be Okowa’s battle-axe to uproot Nwaoboshi, a former state chairman of the party and lawyer, who won the senatorial seat for two tenures on PDP platform, but dumped the party thereafter for All Progressives Congress, APC.

Political watchers think the race between Nwoko and Oseji for Delta PDP senate ticket is predictable, given Nwoko’s influence.

Governor Okowa, who represented Delta North from 2015 -2019 was long speculated to return to the Senate after his stint as governor and lately, under pressure to run for President, but he decided otherwise, especially on the former, after sensibly considering the fact that his daughter, Mrs. Marilyn Okowa-Daramola, is running for Ika North East Constituency seat in the state House of Assembly.\Pundits said the governor would not for any reason let Nwoko or any PDP senatorial candidate to be defeated by Nwaoboshi in the general election, adding: “This is where the real battle lies”.

Both leaders (Okowa and Nwaoboshi) have an unfinished political business and Okowa would gladly want to hammer Nwaoboshi, who had long declared his willingness to face him (governor) or any other candidate of PDP for Delta North Senate seat in 2023.

Nwaoboshi thinks Okowa is a junior politician to him judging from when he started politics. But Okowa’s dependable loyalists had always counteracted that his political brinkmanship remains unparalleled and outstrips Nwaoboshi

Nwoko, former Vice Chairman of Okowa Campaign Organization, had, over the years, contested for Delta North senatorial ticket, the last of which he lost to Nwaoboshi, then in PDP, during the 2019 primaries, in what Nwoko’s close aides disputed as Pyrrhic victory.
Strikingly, Nwoko has since appointed a former chief campaigner of Nwaoboshi, Hon. Pascal Adigwe as the director -general of his senatorial campaign organization. Adigwe, a former House of Representatives member, is joining forces with a political strategist and chairman of Nwoko campaign team, Chief Dele Omenegor, to face Nwaoboshi in the ultimate battle for Delta North seat.

Gbandi interlude
But Delta North senatorial seat may not be a completely PDP, APC affair, as Kenneth Gbandi, a senatorial aspirant on the platform of African Democratic Congress, ADC, is working on the well-meaning people of the district to dump recycled politicians for a fresh lease of life, which he supposedly represents.

Ibori unmovable on Amori
In Delta Central, Chief Ibori is up against any politician and backers that may want to stop his political associate and former Commissioner, Chief Ighoyota Amori, from picking PDP’s ticket for the senatorial district.

Chief John Nani, a former Director of Finance and Administration at Delta State Oil Producing Areas Development Commission, DESOPADEC, believed to have the ears of Okowa, is one of those that kicked against Ibori’s plan, maintaining that the era of godfathers imposing candidates on the people was gone. He is running against Ibori’s candidate.

In March when Amori launched his senatorial ambition at Mosogar, Ethiope-West local government area, Ibori avowed: “I am behind him and I will support Senator Ighoyota Amori every step on the way. And anybody, anyone conspiring, anybody that thinks that because I am now a former governor they want to conspire to disgrace me, God will disgrace all of them.”

Amori, initially declared Senator-elect in 2015 was sworn-in and functioned as the Senator representing Delta Central senatorial district until Omo Agege, then the Labour Party, LP, candidate, through the instrumentality of the judiciary, upturned his victory. In 2019, Amori lost PDP senatorial ticket at the primaries, so he is determined to clinch it this time around.

Similarly, Ibori is supporting his daughter, a two-term lawmaker representing Ethiope –West Constituency in the state House of Assembly, Hon. Mrs. Erhitake Ibori-Suenu, angling for Ethiope Federal Constituency seat in the House of Representatives against the incumbent representative, Hon. Ben Igbakpa, who many think has performed admirably and merits a second term ticket.

Remarkably, Igbakpa is generally regarded as Ibori’s political godson having been under his tutelage and it remained to be seen how the Ethiope federal constituency struggle would end with the former governor’s daughter challenging her father’s protege. Ibori reportedly asked Igbakpa to step down, but he was said to have vowed to contest the primary.

Omo-Agege insists on Dafinone
Senator Omo Agege, a former member of the Ibori PDP political family until he left the party in 2015, who has given the Delta Central district what his supporters describe as robust representation in the last seven years, is currently the symbol of the opposition in the state. He, therefore, stands against the political aspirations of Ibori’s candidates, PDP and other parties in the district.

As governorship aspirant and leader of APC in the state, he has endorsed renowned chartered accountant, Chief Ede Dafinone, to take over from him in the Senate and already campaigning against Amori, Nani and whoever Ibori and PDP finally choose as candidate for 2023 Delta Central senatorial election. He wants to control Central district as a new political godfather

Diden, Reyenieju turn to Uduaghan
In Delta South senatorial district, comprising Ijaw, Isoko and Itsekiri, where Senator James Manager who kept the senatorial seat to himself for almost 19 years running has declared to run for 2023 governorship in the state, former Chairman, DESOPADEC and leader of the influential Delta Political Vanguard, DPV, Hon Michael Diden, aka Ejele, an Itsekiri and certified Okowa devotee, is targeting PDP senatorial ticket against the wishes of former member of House of Representatives, Hon. Daniel Reyenieju, an Itsekiri, who also wants the position.

Ex- governor, Dr. Emmanuel Uduaghan, is the political leader of Delta South by all standards and both aspirants defer to him. However, Diden, who hails from Warri North local government area as Uduaghan that installed him chairman of the area, years ago, resisted moves against Okowa becoming PDP’s candidate in 2014.

The political pressure group, DPV, which Diden chairs is one of the political contrivances that was used to deliver Okowa’s governorship in both 2015 and 2019.

It is not clear where Dr. Uduaghan, who personally stepped-down his senatorial ambition, stands in the Diden/Reyenieju senatorial bid. Both aspirants have visited him and sought his blessings.

Uduaghan’s daughter, a development activist and management entrepreneur, Orode Uduaghan, is running for Warri North Constituency ticket for state House of Assembly seat against the incumbent, Hon Martins Alfred, understood to be a Diden proponent. Hon Diden was said to have attempted some negotiation with Uduaghan on his daughter’s ambition, but the upshot is not known.

Joel-Onokwakpo to break PDP dominance
Senator Omo-Agege is not keeping silent, as he is backing an entrepreneur and former coordinator of Federal Inland Revenue Services in Delta, Edo and Rivers, Hon Thomas Joel-Onowakpo, expected to effortlessly pick APC’s senatorial ticket in Delta South to counter Uduaghan and PDP’s supremacy in the senatorial district.