Posted by Emmanuel Egobiambu | 2 weeks ago 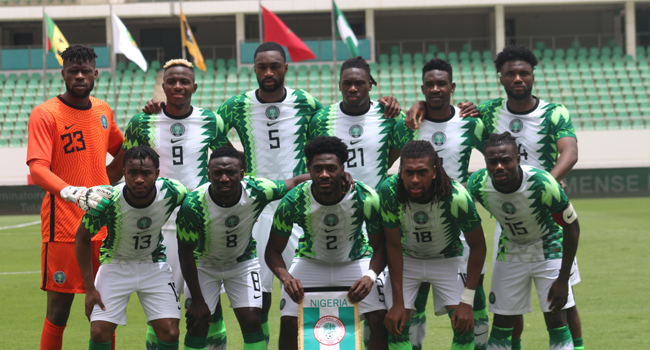 The Super Eagles line up against Sao Tome and Principe. Twitter@Randa Andrew


Napoli striker Victor Osimhen scored four goals as the Super Eagles walloped Sao Tome and Principe 10-0 in a 2023 Africa Cup of Nations (AFCON) qualifier on Monday to give Nigeria their biggest win in history.

Osimhen opened the score sheet in the 9th minute of the tie, before adding one each in the 48th, 65th, and 84th minutes. This was his first hat-trick and haul for the senior team.

Terem Moffi netted twice, just as Oghenekaro Etebo, Simon Moses, and Ademola Lookman got one each in the tie.

Watford star Emmanuel Dennis, who was introduced in the later stages of the match, grabbed a goal to complete the demolition in the game played in Morocco.

Last week, Jose Peseiro’s men beat Sierra Leone 2-1 in Abuja to open their 2023 AFCON qualifier account. The Super Eagles now top the Group A standings with six points followed by Guinea Bissau on three but with a game at hand.

With five goals, Osimhen is now the top scorer in the qualification series for the competition billed for next summer. Nigeria’s next game in the race for the biennial showpiece is in September when they take on Guinea Bissau.